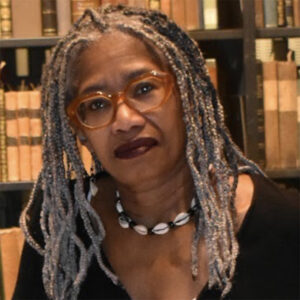 IfeMichelle Gardin is a native New Havener who has been a Cultural Curator with a family legacy of advocacy in the African American community.  Currently, Ife is the Creator Coordinator of the Elm City LIT Fest, a celebration in the spirit of the Harlem Renaissance that will feature LITerature and LITerary Artists of the African Diaspora from CT and beyond.  Elm City LIT Fest will be a virtual event in September 2020.

Ife has always organized events and created ways to showcase artists. Beginning in 1995, with the IfeTayo Cultural Arts Festival to 2005-08 Kwanzaa celebrations at Long Wharf Theater. Ife has worked as a Community Engagement Coordinator for The Shubert Theater, Arts Council of Greater New Haven, and Long Wharf Theatre.

Of her many significant contributions to art and  the community , she is most proud of her role as coordinator for The Dwight/Edgewood Project, a Yale drama program that matched neighborhood children with Yale Drama students to create and perform plays.  Ife created the [email protected] Project in the summer of 2009 producing a play written by then Yale Drama Grad Student Marcus Gardley. Today he is an award- winning playwright.  The program was developed to teach teenagers about the opportunities in production and backstage positions in theater.  Youth were taught how to build a set, light and sound design, as well as costume design and production.  The production was performed at Yale Afro-American Cultural Center and at the National Black Theater Festival in North Carolina.

Throughout her life IfeMichelle has been committed to connecting her passion for culture and arts and enhancing the quality of life for her community and looks forward to further developing Cultural Awareness throughout the region.  Ubuntu Storytellers gives her an opportunity to do just that while increasing understanding among all people.